We will conserve only what we love

In the end, we will conserve only what we love.
We will love only what we understand.
We will understand only what we are taught.
-Baba Dioum, Senegalese poet
Through my fellowship, I recently attended a meeting in East Lansing that was hosted by the Great Lakes Stewardship Initiative and the Great Lakes Fishery Trust. The conference brought together educators and outreach coordinators from across the Great Lakes region and focused on one key theme: Place-based education. Now, I had had an abstract, opaque definition of this term floating around my head for some time, but had not yet gained a firm grip on it. Truth be told, I had not made much of an effort to understand how place-based education differed from typical, run-of-the-mill education, or why it was important. That is, until I moved back to the Great Lakes area after spending a few years on the east coast…but I’ll get to this shortly.
So, what is place-based education (PBE)? PBE “focuses learning within the local community of a student. It provides learners with a path for becoming active citizens and stewards of the environment and place where they live” (Antioch University, Center for Place-based Education). Okay, this makes sense. What may be more of a challenge, and what is embedded in the definition and philosophy of place-based education is this: a sense of place. This is a key element of environmental stewardship and of PBE. By sitting in on talks and exercises with the rest of the meeting participants, I learned that a sense of place stems from ‘place attachment,’ which stems from both ‘place dependence’ and ‘place identity.’ Think of place dependence and place identity as our functional and emotional connections, respectively, to an area where we reside. I also learned that building a sense of place is less often the direct focus of environmental and place-based education than issues like service-learning and community engagement. Now, these surely are important components of an educational model. But, if we (teachers, informal educators, scientists, etc.) can enhance our focus on helping a student to discover his or her own sense of place, we likely will continue to count stewardship among the outcomes in addition to community service and academic excellence. Now we’re on to something!

All of this has me wondering: what are our functional and emotional connections to our places? How often do we take these for granted? And, following Baba Dioum’s conviction, how can we ensure that the youth of today gain a deep enough understanding of and appreciation for their local environment that they will be moved to protect it? These are questions that I have neither all of the answers to, nor the time or space to fully address. I will offer a few thoughts, however. Over the past several years I have had many opportunities to educate students and communities on different aspects of the environment. Much of this has taken place in lower Chesapeake Bay, where there are distinct and obvious connections to both the fresh- and saltwater habitats, as well as to the iconic species that define that region: the blue crab (Callinectes sapidus), saltmarsh cordgrass (Spartina alterniflora), the eastern oyster (Crassostrea virginica), and others. These are ingrained in the ideals and lifestyles of local tidewater Virginians. As I observed these connections with an outside perspective, I found myself drawn to the bonds that those communities have with their ecosystem(s) and the layers of history that underlie those relationships. And, throughout this process, I was vaguely aware of a couple of things: 1) the people, landscapes, and ecosystems of tidewater Virginia and Chesapeake Bay were interesting and worthy of study and protection; 2) this was not my place. 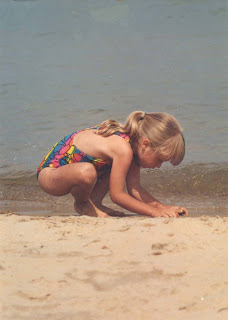 Toward the end of my graduate degree in Virginia, I was consumed with thoughts of the Great Lakes – of home. As I mentioned, my return to the region ignited in me not only a desire to more fully grasp the concept of PBE, but also a strong awareness of my own sense of place and how this was instilled in me over time. So, what was it that drew me back? Why do I associate so greatly with these freshwater seas? Partly, it is because I want to study them. The Great Lakes basin is a rich, complex ecosystem that, until abandoning terrestrial ecology to delve into marine science out east, I thought little of exploring in much (professional) detail. Partly, it is because I was bred to love them. These coasts are where I swam for the first time, dug in the sand and mud, discovered my first bivalves, caught my first fish, and rolled down my first (seemingly endless and frighteningly steep) sand dune. It is also because I was taught to love them. I hiked the forests on school field trips, collected and examined countless jars of pond water, and pressed the leaves of native trees into art. We stand in the midst of one endless, freshwater science experiment; an open-ended ecological investigation; a living mural of some of the most picturesque places on the planet. I came back to the Great Lakes because I love them. I love them because I understand them. I understand them because their importance was both educationally and emotionally reinforced.

Living in Michigan for 23 years before moving away, my awareness for my own sense of place was buried, so much a part of me that I did not know how strong the connection was. However, my sense of stewardship for my place is sentient and energetic – a creature of its own. With or without an awareness of why, this has never wavered. Periodically, I question whether or not kids today have a solid appreciation for the lakes, rivers, and forests of this region. Is their sense of place at risk of being underdeveloped or overlooked? I think not. At the PBE Conference, aside from two refreshing days of ‘sharing’ games and arts and crafts, I gained two days worth of perspective on just what it takes – and what our formal and informal educators are doing – to implant in today’s youth the knowledge that this is their place. This is our place. If we stay on the path being paved by my fellow meeting attendees and those who came before them, I happily predict that the youth of today and tomorrow will come to love, understand, connect with – and fight to protect – the Great Lakes ecosystem well into the future.

Happy holidays (wherever your place may be)!
-Cassie
GLC Sea Grant fellow, 2011-2012
Posted by Cassie No comments: 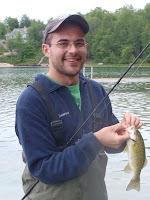 As mentioned in the previous post, Eric MacMillan and I participated in placement week for the 2012 class of Knauss Marine Policy fellows back in November. It was a hectic but exciting experience and we met tons of great folks associated with the program including past and current fellows. We were so busy that Eric and I only spoke for about 15 minutes the whole time we were in DC!
Being a legislative fellow, the week started Monday with workshops by the Congressional Research Service (CRS) at the Library of Congress. The workshops covered the process of developing legislation, how bills are introduced and voted on, and how the CRS could help us research important topics for our positions. We also had the opportunity to meet with the current class of legislative fellows to learn about their offices and experiences. On Tuesday, each host office gave a presentation to help us better understand the role fellows would have in their office and what we could expect to gain from our experience there. Several of the members of Congress even came and met with us themselves! Positions were available in both the Senate and the House of Representatives, with either member offices or committees within Congress, and varied geographically from Florida to Washington and from Maine to Guam.
On Wednesday the interviews began, and with 14 positions available in 13 offices there were tons of interviews to cram into two days. Some offices also invited fellows back after the initial interview to meet the Congressman or Congresswoman from that office or to attend events with the office staff. By Friday morning I’d been to 22 interview related activities and had the opportunity to chat with a handful of members of Congress! There were many fantastic offices with a lot to offer so making a choice was difficult for almost everyone. There was much discussion at the social event the last night about the impressions everyone had felt from each office.
Friday afternoon the legislative placement process ended with everyone being placed in an office. I was very pleased to receive a placement in the office of Congresswoman Chellie Pingree from the 1st district of Maine. Future updates are in the works!
Kyle, 2012 Knauss Marine Policy Fellow
Posted by Kyle No comments:

A Whirlwind of a Week

This past November, I along with the rest of the 2012 class of Knauss Marine Policy fellows, traveled to Washington DC for a week of interviews, happy hours, and tough decisions. The goal of placement week was for each fellow to be matched with a host office, an office in either the executive or legislative branch of the federal government, which he or she would work for during the fellowship year. At the end of placement week, everyone was matched with a host office and we all left with a better idea of how we would be spending the next year.
As an executive fellow, my week began Monday morning with a series of presentations by representatives of each potential executive branch host office (44 to be exact…). The presentations described each office’s responsibilities and gave us an idea of what it would be like to work with them. A broad range of offices were represented ranging from various positions within NOAA, the US Coast Guard, the Navy, the National Science Foundation, and the Department of State. The day was a bit draining but it was very exciting to consider the potential experiences each office could offer.
The next three days consisted of interviews (I signed up for 14, but others signed up for as many as 18!), happy hours, and getting to know the DC area. Interviews were a chance for the fellows to understand what it would be like to work in an office and for the representatives of the host office to get to know the fellows beyond a paper application. In the evening, we were off to happy hour which allowed a bit of relaxation but also presented an opportunity to interact with staff from the host offices on a more personal level. Days were jam-packed but it was a great opportunity to improve interview skills, begin to understand the diverse group of federal agencies responsible for managing our marine and Great Lakes resources, and figure out where each of us might fit in as a fellow. It was also nice to see that many former Knauss fellows have become permanent employees in these offices. Most of my interviews were in Silver Spring, Maryland at NOAA and it seemed the “NOAA Mafia” (Knauss alumni) was well represented in each office.

For the executive fellows, the placement process concluded Friday morning when we all found out where we would be working over the next year. I accepted a position with NOAA Fisheries Service in the Office of Habitat Conservation. Though I will be based in the DC area, much of my work will bring me back to Michigan where I will be working on Great Lakes habitat restoration issues. More to come later!
-Eric, 2012 Knauss Fellow
Posted by Eric No comments: