Wrapping Up: Reflections from Ankita Mandelia

It has been an amazing year!! My fellowship with the International Joint Commission Great Lakes Regional Office was incredible. A lot has happened over the past several months, so you’re in for a long one….

The last time I wrote was right before the Fall 2015 IJC Semi-Annual Meeting.  This meeting was a major turning point in the fellowship for me: it was when the large-scale picture of exactly how the IJC works finally became clear.  Up until that meeting and advisory board meetings associated with it, I had worked with IJC advisory boards, staff and Commissioners but didn’t recognize how they all fit together. Seeing everyone assembled in one place and the order in which meetings took place helped me to understand how science is shared from the experts on the IJC advisory boards to the IJC staff, to the IJC Commissioners, and finally to the governments.  It is one thing to know that the work in academia makes a difference, but it is another thing entirely to watch that expertise being used to provide advice to the governments of two countries.  I am excited that I had the opportunity to witness this process twice over the course of the year.

The semi-annual meetings also provided an excellent opportunity for networking and to spend time in the Canadian and U.S. capitals. I generally only communicated with the Health Professionals Advisory Board (HPAB) and the Research Coordination Committee (RCC) members over the phone; at their board meetings during the semi-annual meetings, I was able to meet them in person, which helped me better understand how they think. On top of being brilliant, the IJC advisory board members are some of the nicest people I have ever met. I had never been to Ottawa before. I did get a chance to explore a little bit, and it is a nice city. In April, the reception was held in the Benjamin Franklin Room of the U.S. Department of State building, which was a bit like a museum. That was when I realized the full weight of the fact that I was witnessing science turn into international policy, and just how lucky I was to be there.

Over the course of the year, my primary responsibilities were to assist the Secretariats of the HPAB and RCC with routine activities such as running the board meetings. I also had the opportunity to help these two boards with some science activities.

With the HPAB, I conducted a biweekly news digest focused on topics of current interest to the HPAB. This particular activity helped me to stay updated on current events, and also focus more on the human impact of environmental issues. One interesting project I worked on was a project that aims to use social media to understand the relationship between major environmental events/issues (such as the development of harmful algal blooms in an area) to the physical, mental and economic health of communities. Though this project is still in its very beginning stages, it was interesting to learn about sets of expertise that I am not familiar with – the nexus of health informatics, social media and computer science.

With the RCC, I helped to facilitate the Future Indicators workshop. Future Indicators are potential means to measure changes in the Great Lakes ecosystem. These means are not currently used because not enough data is available, but the potential to develop that data exists. The goal of the expert workshop was to determine the relative importance of the indicators to prioritize which indicators data collection should focus on in the near future. I found this project exciting because I again had the opportunity to witness experts making decisions that would be communicated to the governments – and this time the discussion was much more technical (which made the engineer in me geek out quite a bit).

I attended several meetings, workshops and conferences in addition to the IJC semi-annual meetings. Two stood out in particular. One was a workshop that the IJC hosted in Windsor about microplastics. This workshop was incredible – it brought together experts from Canada and the U.S. in government, academia, citizens’ groups and industry. The discussion was how to tackle the issue of microplastics pollution from research, application and policy standpoints. I was amazed at how constructive the discussion was despite vastly differing viewpoints. How to handle microplastics pollution is a deeply complicated issue.

The other conference that stood out was the International Association of Great Lakes Research conference. This was my third time attending the conference, but my first time not attending as a student. This time, I knew more people and was familiar with more research, which makes the whole experience slightly less overwhelming – there’s a lot of information shared at this conference! I realized how much I’ve learned and grown since I was a student. That being said, I was very excited to see and hang out with the Michigan Tech crew this year, including one of my master’s advisors. I also presented my research over the course of my IJC fellowship on life after delisting for the Great Lakes Areas of Concern (more on that below).

My major accomplishments over the year involved deviating quite a bit from an engineer’s way of thinking. I learned to communicate science in a way that can be more generally received, and I dabbled in social science research.

I had an opportunity to contribute to the IJC Great Lakes Connection Newsletter – I wrote an  article about the Great Lakes Communications Indicators (French version translated by IJC Staff). This was the first of many lessons by IJC staff on how to communicate complicated concepts in a simple and engaging manner.

I gave two professional presentations. The first presentation was a personal milestone – I was invited to give a brown bag presentation at NOAA-GLERL on my master’s research on PCBs and metals contamination and remediation at the Torch Lake Area of Concern. I worked extensively with IJC Great Lakes Regional Office staff to turn my master’s defense presentation into a story. I am honored that not only did I get to give this presentation, but that it was well-received.

I used my newly-acquired skills to develop a presentation on my Great Lakes Areas of Concern Life After Delisting work, which I presented at IAGLR. This presentation was particularly fun to give because it was on my current work, and I was able to present it to a fairly broad audience, including mentors and colleagues from IJC, Michigan Sea Grant, and Michigan Tech.

This presentation was the culmination of the largest accomplishment of the year for me: to go through the process of investigating a topic that can be turned into advice to the governments of Canada and the U.S. Over the course of the year, I completed a policy research project that examined what happens to the Great Lakes Areas of Concern (AOC) after they have been delisted. Findings discussed how communities of delisted AOCs conduct post-delisting monitoring, maintenance and community involvement activities, as well as how these activities are funded. Recommendations made out of this work are directed to both communities of currently listed AOCs and the governments of Canada and the U.S, and focus on steps each can take to maintain improved conditions at delisted AOCs, and how communities can keep environmental stewardship alive. In addition to the value of the research findings to me and to the IJC, conducting this project was my first real experience conducting social science research.

I produced an approximately 84-page report that will be used by the IJC to provide advice to the governments of Canada and the U.S., as well as AOC communities whose sites are ready to be delisted. The report was recently posted on the IJC website. I also briefed the IJC Commissioners on the report at the June 2016 Executive Meeting. The Commissioners were satisfied with my work and recognized me for my service, which is a huge honor.


You’re still reading? Thank you! The end is near….

Before I get to my final remarks, there are a couple of things I want to mention. The first is that over the course of this year, I completed my master’s degree in environmental engineering from Michigan Tech. NOTE FOR PROSPECTIVE FELLOWS: if you can avoid overlapping school with this fellowship, do so. That being said, given the content of my thesis, my fellowship actually enhanced my work. I’m proud of the fact that I earned my degree this year, because of the next thing that I want to mention…

…which is that through this fellowship, I was able to secure my next position: next week, I will be joining the Northeast-Midwest Institute. I am very excited about this position because I will be able to combine my technical background from my degree with the policy advisory experience gained through this fellowship. I’m going to help develop advice to the U.S. Congress!! I’m going to live in Washington DC!! (Did I mention I’m very excited?)

Overall, my year at the IJC has been a milestone career experience for me. I came into this fellowship wanting to figure out how to combine my interest in policy with my engineering background and communication skills, and I got exactly what I wanted. I had the opportunity to work with extremely accomplished people who are making a real difference in the world, and to learn about how different pieces of the science-policy puzzle work together. I even got to participate in this process with a large milestone project. I am extremely honored and grateful that the International Joint Commission and Michigan Sea Grant took a chance on me to be the first IJC- Sea Grant fellow.

Congratulations! You’ve reached the end. Thanks for reading, and if you’re looking at this fellowship next year, good luck! 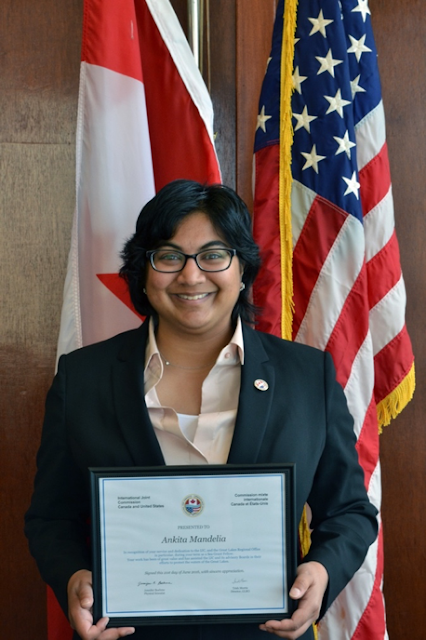