When I returned from maternity leave earlier last week, I was amazed to realize half of my fellowship at the Great Lakes Commission is already over. 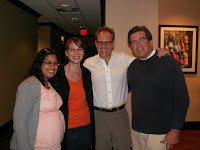 It is an exciting year to be a fellow at the Commission. Since my fellowship began, there has been a lot of widespread attention regarding issues impacting the Great Lakes on both a regional and national level with the Great Lakes Restoration Initiative and the Asian Carp issues catching the greatest headlines. While most of my work has revolved around wind energy and invasive species, I have also been engaged in developing contracts for Recovery Act (ARRA) grants and assisting in the preparation of policy comments on proposed national regulations and policies which impact the Great Lakes. The most interesting aspects about this fellowship has been the opportunity to observe lessons discussed in the classroom come to life in the real world.

One of my professors in law school often talked about the need for political champions in order to drive the implementation of federal policies. Working at the Commission, I have the fortune to be educated on the institutional history behind and the rationale explaining some of the newly enacted federal policies which affect the Great Lakes. For example, one of President Obama’s campaign promises was to designate federal funds to “restore the Great Lakes;” this promise was fulfilled at the end of October when the President signed the $475 million Great Lakes Restoration Initiative into law. This large cash infusion is sorely needed by the region to implement restoration and protection activities, but it was not a new concept developed during the campaign period. Organizations and agencies working on Great Lakes issues have been pushing for dedicated federal funding for years prior to the passage of the GLRI. One of the difference between 2009 and the prior years was that the idea finally garnered enough political will with champions in both the White House and Congress in order to produce the needed results.

During graduate school, I took a class on social change and environmental movements where we studied the various theories that have been developed to explain how and why social change is produced. A few years ago, offshore wind development in the Great Lakes was only talked about in small circles; today it is on the development fast track in many Great Lakes states. High wind speeds over the lakes is not a new phenomena, so what changed that offshore wind has become such a hot topic? A webinar and stakeholder meeting I helped organize last fall to discuss regional collaboration for the sustainable development of offshore wind in the Great Lakes, gave me glimpses into some of the possible reasons. Part of the change comes from the way the issue is framed. Offshore wind energy development is not just an issue of “clean energy” or “energy independence,” it is also regarded as a mechanism to boost the economy of a region which is blessed with rich environmental resources but cursed with a failing manufacturing sector. Government officials and industry leaders have also espoused the secondary impacts of offshore and onshore wind development as potential means of reinvigorating and ensuring the long-term viability of the region’s manufacturing sector. There are also the issues of resource mobilization and strong network linkages. Both of the federal governments as well as the states and provinces have committed financial and personnel support to developing wind energy in the Great Lakes. Furthermore, there are a diverse array of stakeholders involved in the consideration of offshore wind energy in the Great Lakes from federal agencies and state/provincial government to local communities, developers, non-profit organizations, academic institutions, lawyers and consultants. The webinar and meeting I helped organize was hosted by the Great Lakes Wind Collaborative (GLWC), one of the many organizations working to facilitate the development of network linkages in support of the sustainable development of wind energy in the Great Lakes region. I look forward to continuing these lessons during the second half of my fellowship. If you have any questions about the Fellowship, please do not hesitate to contact me.
Posted by Anjali No comments:

What does it take to become a NOAA fellow? 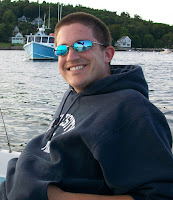 Not all of the NOAA Coastal Management Fellows have the traditional science and policy background you might expect.
Coastal Fellow Matt Nixon has cultivated a great enthusiasm for New England maritime history, both in his studies and in reallife adventures. It is fitting, then, that this particular coastal fellow should gain a crow’s-nest view of New England’s maritime future—harnessing the power of the Gulf of Maine through the wind, tides, and other forms of energy. 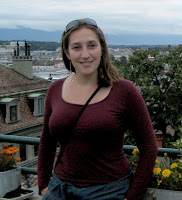 A denizen of the big city becomes a nature lover, an admirer of philosophy turns protector of the coastal environment—at first glance, the life of Coastal Fellow Daniella Hirschfeld is a study in contrasts. Only later is it evident that Daniella has absorbed the lesson in each experience, and her outlook is all the better for it.
Read the full story in the fellow newsletter.
Posted by Lynn No comments:

Close to home: One NOAA fellow will be based in Michigan

Beginning in August 2010, Michigan will be one of six coastal states to host a NOAA Coastal Management Fellow. The fellow will be based in Lansing, MI and will work for two years on working waterfront issues throughout the state.

In Michigan, as in other coastal states, working waterfronts are becoming increasingly privatized.  Working waterfronts allow coastal access for commerce and recreation, combining the busy landscape of water-dependent businesses – ranging from commercial fishermen, to charter boat operations and marinas – with public access points and a variety of services.  The gradual loss of public access to the coasts has never been quantified and communities have few tools for managing competing uses for their coasts.

Interested in applying to work on this or five other coastal projects, including ones in Puerto Rico, Washington, Maine and Wisconnsin?  Visit the program website or contact Lynn Vaccaro for more information about the fellowship.  Note:  applications are due January 29, 2010!
Posted by Lynn No comments: