An invader's wishlist: Corey Krabbenhoft on her dissertation research

For those of you who missed my last blog posts, my name is Corey Krabbenhoft. I have been conducting research in Donna Kashian’s lab at Wayne State University for the last several years. I am excited to report I just successfully defended my dissertation for the degree of Ph.D.!

Since it has been a while since I posted here, I thought I’d provide an update on my research on round goby invasion in the Great Lakes. For more background on this project, you can view my previous blog post here.

One of the goals of this research was to identify site conditions which are common to areas where round goby has invaded tributaries to the Great Lakes. The idea here is that if we can identify site characteristics which are common to areas of invasion, we may be able to use this information to predict the impacts of invasion, or else predict where invasion might occur in the future. A better overall understanding of the process and outcomes of invasion can help streamline management efforts to make prevention and mitigation strategies more efficient and successful.

One question I had was whether invasion is more commonly found in areas where land has been developed for human use. For example, would an urban area be more likely invaded than a rural area? One way to look at this is to use land cover data. This information is freely available for the entire United States from the Multi-Resolution Land Characteristics Consortium. Here they provide land cover data at a scale of 30 meters. For my own research, I used this information to identify the dominant land cover types for the watersheds in my study (Figure 1).

The watersheds in my study represent a wide variety of land use types. In the southeastern part of the state, most of the land cover is urban development because of the metro Detroit area. In the northern part of the state, there is a larger proportion of forested land cover. Land cover can be important in the structure and function of streams because it reflects many different mechanisms by which human activity can impact water quality (Figure 2). For example, agricultural development of a watershed can be associated with increased nutrients (nitrogen and phosphorus) in streams from the runoff of fertilizers. Similarly, urban development is often associated with habitat loss in streams due to the need to stabilize banks and reroute stream channels. 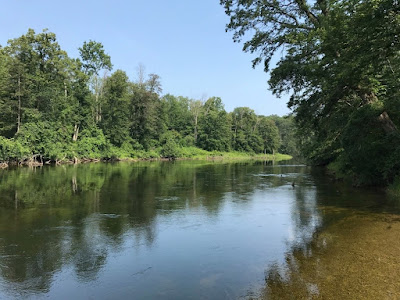 For my research, I investigated the association of these land use types with invasion success of round goby. In addition to land use types, I measured other variables which I hypothesized to be influential for invasion. For example, I looked at logistic constraints associated with invasion (how difficult it is for gobies to move into new areas), characteristics of native species at the site, the basic physical structure of the stream (depth, width, etc.), and the levels of pollutants.

My analysis resulted in six site characteristics that are associated with large round goby populations (Figure 3). Invasion year and distance to river mouth are logistic constraints to invasion which highlight the importance of geographical barriers and the time required to adequately invade a new area. The other four factors help identify what types of sites are most likely to host invasive populations of round goby. For example, round goby are less likely to inhabit a site with high native fish diversity, with mostly natural land cover, in a moderately sized stream, with low pollution levels. This finding is important as it demonstrates that areas impacted by human alteration of the landscape are more likely to host large populations of round goby. This suggests investment in restoration of streams and riparian areas may benefit ecosystem resistance to invasion in the future.


While I continue to work on fine tuning this research, I am excited about these preliminary findings. I hope to identify site characteristics which can help predict potential invasions to increase management and prevention efficiency. This is a goal important to all residents of the Great Lakes region and something we should be invested in as stewards for ecosystem conservation. For more on what you can do to help prevention of aquatic invasive species, Michigan Sea Grant has some other great resources.

Thanks again to Michigan Sea Grant for supporting this study. If you have any questions or comments about this as I move forward with my research, feel free to contact me at ckrab@wayne.edu or on my Twitter page: @ckrabb.
Posted by Michigan Sea Grant 1 comment: