Lake Michigan: The Beauty, The Beast, And A Changing Climate.

My Sea Grant Fellowship have taken me all around Lake Michigan the past couple of months. I've been lucky enough to capture the lake in all her fury and beauty. In this post I'll share some wisdom about one piece of lake shore in particular and preview a coming post about climate change. But first some sounds....

The Beast: "When The Gales of November Come Early"

The Gales of November are known for creating waves on the Great Lakes upwards of 20 feet. They are perhaps most well known for shipwreck the Edmund Fitzgerald which left 29 men dead. Gordon Lightfoot wrote what is now a classic song about the wreck:

Just a day later, as the conference came to a close the weather had broken in classic Michigan style. The sun came out from the clouds and lake Michigan was placid. I took the drive down M-37 and ended up at the tip of Old Mission Peninsula. Old Mission juts out in the center of Grant Traverse Bay.

Old Mission's location in the center of the bay allows it to have a unique micro-climate. The large water body in the bay moderates the temperature on the narrow peninsula. While most of northern Michigan had already lost its leaves by this time in late November, Old Mission's colors were peaking. Rambling through the woods, migratory birds flying south could be heard hiding somewhere among the orange and red hues.


This microclimate makes for especially good fruit growing. The peninsula is dotted with wineries, cider makers, cherry orchards, apple orchards and vineyards. These food-oriented businesses form an important part of the backbone of the regions tourism economy. For every winery, there is a handful of inns hosting tourists from all of the world. Of course, the cherries and the fruit make for a vital export commodity.

Danger looms in the beauty, though. Its not just the dangers of windy days. Climate change stands to threaten the culture and the livelihood of the people who live and work on Old Mission. Micro-climates are highly sensitive to the large trends of warming being experienced the world over. In my next blog post (a podcast!) we will interview Alexandra Brewer, whom runs the sustainable development program at Futurewise, an environmental NGO in Seattle, Washington. She is an expert on how climate change will affect the Great Lakes and she is preparing to head to Paris, France for the UN Climate negotiations. Stay tuned!

A calm day on the tip of Old Mission Peninsula
Posted by Samuel Molnar No comments:

The Knauss Fellowship - a wealth of opportunities!

In addition to co-coordinating reports for Congress on harmful algal bloom and low oxygen conditions, I am now also helping to develop a five-year strategic plan for the Great Lakes Environmental Research Laboratory.

Assigned projects aside, I have had the great fortune of participating in numerous professional development activities. In May, I went to a meeting of the International Joint Commission Great Lakes Science Advisory Board to discuss the contents of an upcoming report. At the Canadian Embassy the following day, I observed each advisory board reporting out to the commissioners and providing guidance on the content of the report. 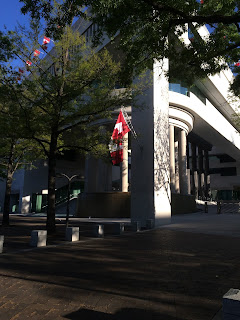 The Canadian Embassy where I observed the proceedings of an International Joint Commission meeting.

During Capitol Hill Ocean Week in June, I observed panels of government researchers and policymakers discussing some of the most pressing issues our oceans are facing. Topics included Arctic Ocean policy, illegal fishing and collaborative marine conservation. One of the most interesting panels was a group of high school and college students who had done notable ecological projects. The students talked about their projects, what inspires them, and their vision for tackling challenging problems, including climate change. The event ended with a leadership panel that included Dr. Katherine Sullivan, NOAA’s Administrator and Undersecretary of Commerce for Oceans and Atmosphere, who discussed her thoughts on challenges and successes in ocean science and policy. 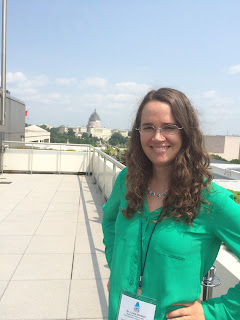 A squinty photo of me at Capitol Hill Ocean Week, with the Capitol Building in the background.

Another day I traveled from Silver Spring to the Dirksen Senate Office Building in downtown D.C. to check out a congressional hearing on the drought conditions in California and other West Coast states. It was sobering to hear just how severe the drought was and is projected to be in the future. However, I was encouraged by some of the senators’ questions, which reflected an understanding of how grave the drought is and displayed an interest in understanding how to help the situation. Theoretically, the senators can use this information to make decisions that support a variety of drought mitigation efforts. I sure hope they do. 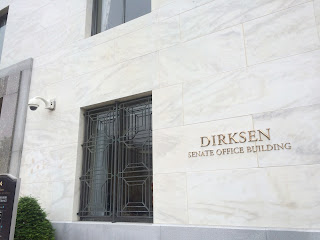 Dirksen Senate Office Building, where I heard a hearing on the West Coast drought.

I also participated in two NOAA workshops: Planning and Facilitating Collaborative Meetings and Project Planning and Evaluation. Both were extremely helpful in providing training in techniques that I hope to do more of in my career moving forward.

A trip to the U.S. Naval Observatory, as part of a Knauss Fellow potluck and open house event, was a breath of fresh air from the usual urban D.C. surroundings. With its green lawn, tall trees, and buildings dating back to the 1800s, the campus has the feel of an old field station. After a potluck dinner on the grounds, we went on a tour of the campus, which included the James Melville Gilliss Library and two large telescopes, one of which we used to see a vivid image of Saturn and its rings! 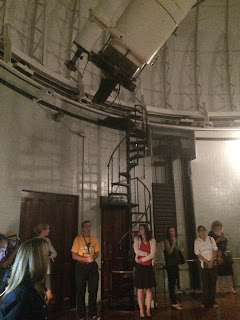 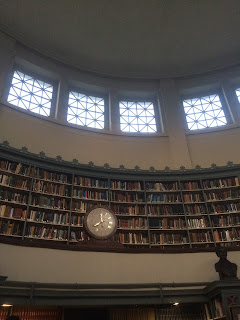 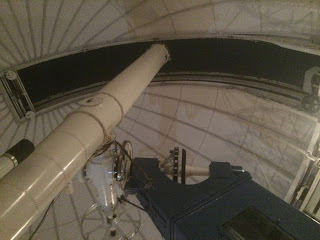 Photos above: Looking around the James Melville Gilliss Library and getting a tour a telescope at the U.S. Naval Observatory.

The Knauss Fellows working on the legislative side also recently organized an event on Capitol Hill. This provided an opportunity to meet with legislative assistants and professional subcommittee staffers working in both the House and Senate, and included a tour of the Capitol building and the Library of Congress. In my humble opinion, the intricate patterns, textures, and colors in the floors, walls, and ceiling of the Library of Congress make it one of the most beautiful buildings in D.C. 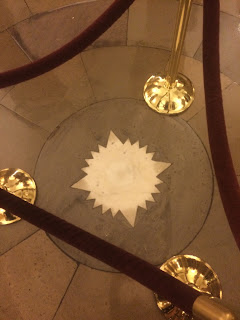 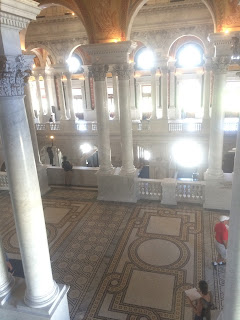 Above left: The star in the floor of the U.S. Capitol Building that marks the point at which the streets in Washington D.C. are laid out and numbered. Above right: a view from inside the Library of Congress.

Through these activities, I have learned about the executive and legislative branches of government, Great Lakes and ocean policy, planning projects, and facilitating events.


Needless to say, I am learning a lot and staying busy, and there are still two months to go!
Posted by Unknown No comments: